I definitely think more players need to consider a move aboard because it allows you to live a different life that you’re used to, says Kaka Dembele

The 23-year-old, more commonly known as Kaka, started his career with Dartford, before moving to Thamesmead Town and Greenwich Borough. 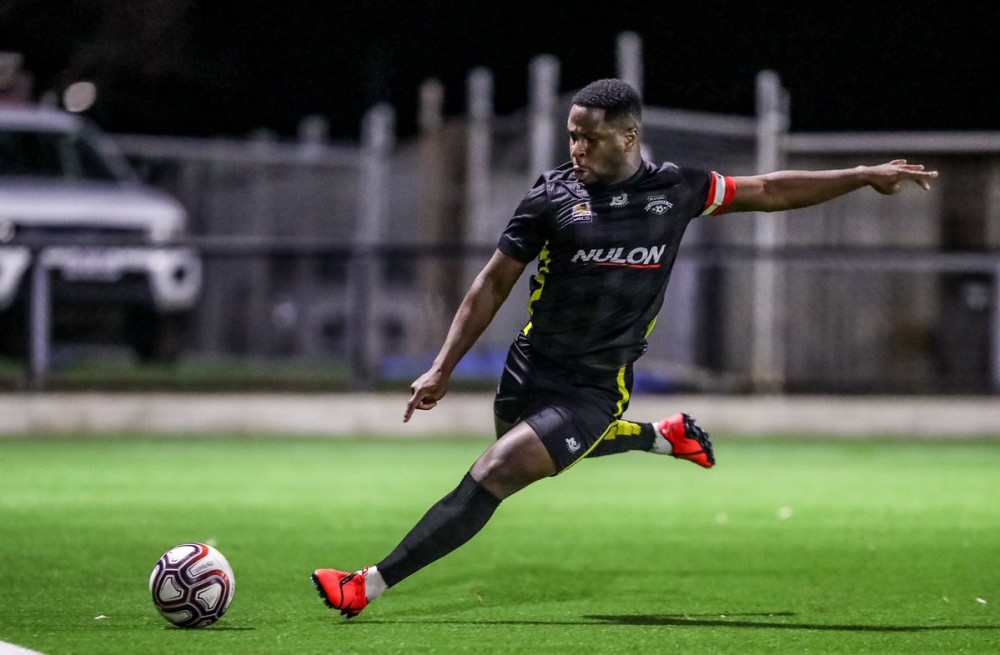 A conversation with then Greenwich Borough goalkeeper Michael McEntegart, who hails from Adelaide, saw Dembele pack his bags to fly down under on 20 May 2018 and he hasn’t looked back.

He now plays semi-professional football for Seaford Rangers in the South Australia State League One.

The side are in sixth-place of 12 clubs in the table, having banked seven wins and a draw from their 14 league games.

A left-back at Greenwich Borough, Dembele is now a striker and has scored six goals in 12 games so far this season, which ends on 17 August 2019.

“My football career got off to a promising start in the U.K.  I went on a few trials with professional clubs whilst coming through the ranks at Dartford,” recalled Dembele.

“For various reasons they didn’t work out and I continued on my path to break into Dartford’s first team, which was difficult as there were some quality players at the club at the time.

“After scoring a few goals and not making as many appearances as I would have liked, I had agreed with (then Dartford manager) Tony Burman that it was best that I looked elsewhere to get the minutes on the pitch that I needed for my development, which resulted in me making a short trip down the A2 to Greenwich Borough, where I was working under Gary Alexander for a short period of time before Paul Barnes became the manager for the rest of that season.”

Conversations with McEntegart struck a cord with Dembele, who found employment in the construction trade whilst sealing a contract with Adelaide outfit Seaford Rangers.

“Whist I was at Greenwich Borough, Michael McEntegart and I were speaking and we got into the subject about playing aboard and I expressed my excitement and goal to play in a different country,” said Dembele.

“I just want to say a massive thank you to Michael McEntegart, Paul Barnes and Nick Davis (not the current Ramsgate manager) because none of this would have been possible without them.

“Michael spoke to a few teams here in Adelaide and they got in touch with me.

“After a few weeks or talking and coming to an agreement in terms of contracts, I then confirmed that I would be leaving Greenwich, no matter what the outcome was in the play-offs we were in at the time and I left the UK on Sunday 20 May 2018.

“The standard of football in State League One is good. It’s semi-professional and there are some very good teams that play very good football in this league.

“Of course, some games are easier than others but the standard is high and it did take a short time to adapt but now it feels second to none.

“When I got here, I figured that if I wanted to stay I had to work in construction for 88 days to have a chance at extending my visa, which I did.

“It was very difficult to say the least but I enjoyed it. At the moment I’m involved in creating football school holiday camps for children to enjoy their time off.  I’m also working at a private school, teaching football.

“Here in Australia the standard isn’t much different (to England).  As it’s such a big country the league’s are split up according to the area of Australia that you’re living in.

“There aren’t many leagues or teams but the standard is still very good.

“It’s incredible here, scoring in my first two games and going into winning the golden boot, having only played around 12 games, was something that I couldn’t imagine doing but at the same time it was good to hit the ground running.

“This year has been different, having been awarded the captaincy, which I’m very grateful for.

“The season is a lot shorter here, we have eight games left and hopefully we will make the play-offs.”

Not many Brits decide to play their football abroad and Dembele recommends it.

“I definitely think more players need to consider a move aboard because it allows you to live a different life that you’re used to.

“You meet new people, make new connections that you never know you might need to use at some point in life.

“I think it’s good to look for a move anywhere, not just in Australia as it has allowed me to learn more about games and about myself personally.”

Dembele said he is weighing up his options, when asked about returning to England to play.

“At this moment in time the season is still going so come the end of it I will weigh up my options and see what I will benefit from but yes I would defiantly think about returning and playing in England.

“Visa reasons tends to make it hard to stay here for more than two or three years.  My mum and sisters are in my best interest, so I’ll have discussions with them soon and we will see what happens.

“I just want to encourage more people to take that step and move away to play.

“If you don’t like it, there’s always a plane home that you can catch.  Some things work out and some things don’t.  That’s life.

“Taking football out of the equation, it’s good to travel and see the world.  So many players that I’ve played alongside always wished they had the chance to play aboard and once this opportunity came knocking there was no way I would turn it down.”