Deal Town sign former Ramsgate defender Jack Penny: We have no doubt he will fit in well with our squad and he is another talented young player who has plenty of Bostik League experience

The 22-year-old left-sided player was at Southwood Stadium for the past three years and has put pen to paper to play his football at The Charles Sports Ground next season. 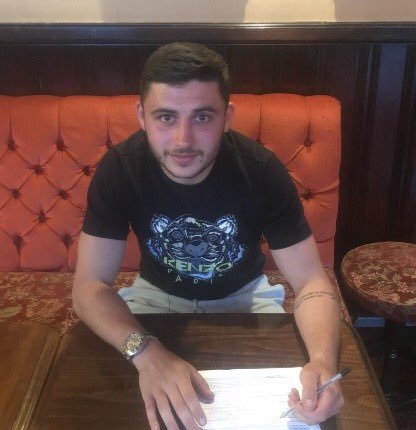 “Jack is a player we have liked for a long time and we are delighted he has agreed to join the club,” assistant manager Steve King told www.dealtownfc.co.uk.

“We have no doubt he will fit in well with our squad and he is another talented young player who has plenty of Bostik League experience.

“We are looking forward to working with him and helping him to further develop his game.”

“Although this is a time of rest for the players, it is arguably the busiest time of the year for those responsible in managing teams at this level,” said King.

“We are pleased that having met nearly all of last year’s squad they have all currently agreed to stay with the club next year.

“Due to logistical reasons we are still talking to a couple of players but the vast majority of players, who have done well for the club over the last two seasons, will be back at the start of pre-season, looking to help us push on next year.

“We are lucky that we already have a good base to build on but we are still taking to a number of other players who we feel can improve the squad and create further competition for places.

“We hope to have news of more signings as they happen over the coming weeks.”

Reflecting on the strong standard of the Southern Counties East Football League Premier Division,  King added: “Last season was our second best league season after the 2017-18 season for over 15 years at the club and demonstrated the progress that has continued to be made.

“Our League was recognised as one of the strongest in the country at this level last season with two sides making The FA Vase Semi-Finals and a number of other very strong sides in the league.

“We were a little disappointed with our final points tally but having beaten both Cray Valley and Canterbury City during the season, it showed that with a little more consistency this group of players is more than capable.

“Our away form was the best it has been for a number of years but having gone nearly a year without losing at the Charles Sports Ground it was our home form that dipped a little.  This is something that we will be focusing on again come the new season.”

King was full of praise for the club’s efforts to improve facilities at The Charles Sports Ground.

He said: “It was great to see further improvements throughout the year.  The ground is now looking very impressive and Dave Chmura and his band of volunteers do a great job in constantly upgrading facilities at the ground.

“The improvements in the ground since coming to the club in January 2015 are very impressive and it is nice to hear so many positive comments from visitors to the ground.”

“In other areas of the club we have continued to work with Deal Town Rangers in ensuring that the best young players get given the opportunity to play first team football if they are good enough,” said King, who shares his name with Welling United's manager.

“There are a number of very good players between the ages of 16-18 currently and if they continue to work hard at their game, it is hoped that we will see some of them in the first team over the coming years.

“It is very important that a club like Deal Town are able to produce its own players and although this is never a quick fix, the groundwork has now been put in for these players to be given an opportunity.

“It was also pleasing to see Deal Town Rangers seniors using the Charles Sports Ground this year as they achieve a top four finish in their league as the link between the two club’s continue to develop.

“It was great to be able to attend the Festival of Football at the ground at the start of this month and see all of the teams at Rangers play at the ground on the pitch, another day that showcased the excellent work done by all at the club.”