Canterbury City, who have been playing at Ashford United’s Homelands Stadium for the past three years, will switch to the Charles Sports Ground for their 2017-18 campaign. 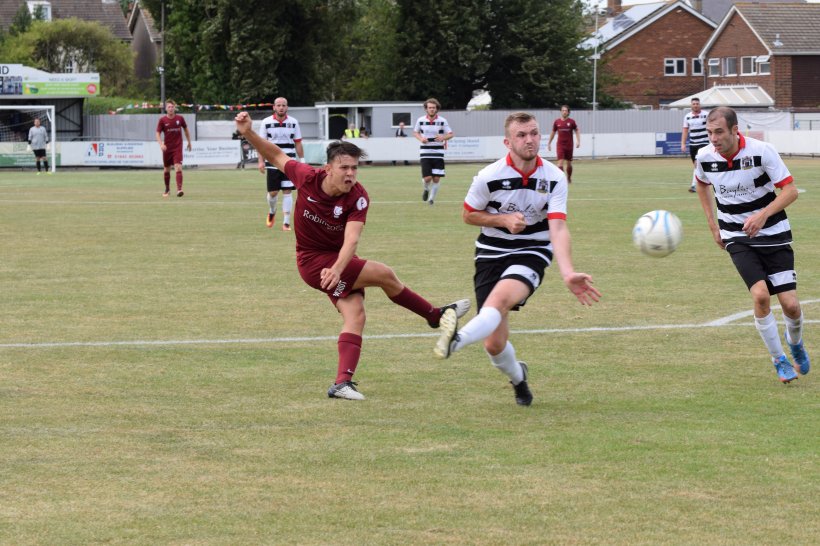 Deal Town (black and white) lock horns with Canterbury City at The Charles Sports Ground, where both teams will be playing next season after agreeing a one-year groundshare deal.
Photo: Canterbury City FC

Newly-appointed Deal Town chairman Dave Chmura said in a statement published on their website: “The rising standard of both the playing surface and the facilities at the Charles Ground were major factors in Canterbury’s decision to approach us requesting a one-season groundshare and I consider that this agreement is a reward for all the hard work that has been put in by everyone at the club over the past few years.

“Our loyal supporters can now look forward to watching Southern Counties East League matches at the ground every week next season and when the two clubs play each other the phrase local derby will take on a whole new meaning!”

Canterbury City chairman Tim Clark added in his statement that was published on their website: “It is public knowledge that there have been some ongoing legal issues at Homelands which in turn have impacted on the 3G all-weather playing surface there.

“My job as chairman is to ensure that City can continue play Southern Counties East League football next season while we move towards having our own stadium in due course.

“We therefore approached Deal Town, who were very welcoming in their response and we have now agreed terms with them for next season, which is great news.

“Deal have put a lot of effort into improving the Charles Ground and the playing surface looks very good.  Both myself and Deal chairman Dave Chmura feel that this arrangement will positively benefit both clubs and the necessary League and FA registration formalities are now being attended to.”