Captaining a team, walking out at Wembley having just won the league as well, I don’t think it gets any better than that! I haven’t dared to dream about this the whole way through, but someone’s up there looking down on me, says Andy Walker

The Millers sealed the Southern Counties East Football League Premier Division title after coming away from Canterbury City with a 2-0 win at Salters Lane in Faversham. 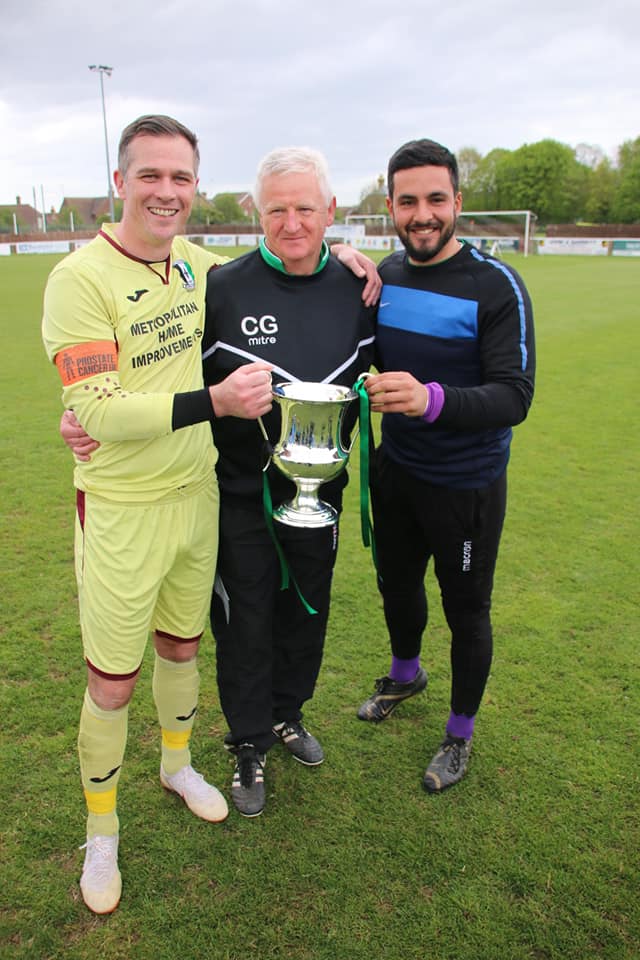 Kevin Watson’s men had to wait until the 76th minute to break the deadlock through Francis Babalola, before his strike partner Gavin Tomlin doubled their lead 10 minutes later on a nervy day.

Cray Valley rose to the summit for the first time this season after beating Croydon 5-0 last Monday, thanks to Corinthian slipping up to a 2-0 defeat at Fisher and the Millers scored 108 goals in their 38 league games, collecting 91 points, finishing a point clear of Corinthian in what was an exciting title race.

Michael Golding’s side thrashed Bearsted 5-0 at Gay Dawn Farm but it was their defeat at Fisher on Easter Monday that denied them the title in the final week of the season.

“I don’t know what to think to be honest with you, I’m just absolutely blown away,” said Walker, 37.

“What a season it’s been, it’s a great, great bunch of boys who have all pulled together the whole season, never stopped believing.

“Fair play to Corinthian, listen they pushed us all the way but we’ve really matched them week-in-week-out. We’ve had the distraction of the Vase, which wasn’t always easy. We’ve stayed strong, we’ve stayed good and listen we’ll now enjoy this.”

Ben Smith revealed on the eve of the game that he has suffered from many sleepless nights after his side were defeated 2-1 on aggregate in The Buildbase FA Vase Semi-Final, thus missing out on a dream day out at Wembley Stadium.

Canterbury City were the better side during the first half yesterday but lacked quality in the final third and the Millers’ excellent forward players came to the fore towards the end of the game.

“Do you know what? I have expected that.  I half expected it to be the way it was,” admitted Walker.

“We knew that a goal would probably change the way that the game went and all the time we didn’t have that, listen, Canterbury were just out to spoil it weren’t they. They didn’t want to win the game in the end a draw they would have gone away happy.

“We were always going to be up against it but we just needed to remain patient and whatever way it came, that first goal, I think was going to kill them off and that’s the way it happened.”

Fans heading to Wembley Stadium to watch Cray Valley lock horns with Chertsey Town on Sunday 19 May (12:15) will have to remain patient with the Millers because they have a tag of being a second-half team.

“We’ve done that a lot this year! We’ve been patient. We’ve been 0-0 at half-time and we’ve worn teams down and bear the fruits in the second half,” added Walker.

“I thought they were probably better than us in the first half but when you’re not really playing for anything, it’s easy to relax and spray the ball about but we were playing for something massive but I think in the second half we just over ran them and killed them.”

Cray Valley play with three centre-halves in the shape of Liam Hickey (left), Ashley Sains (central) and Cem Tumkaya (right), with two wing-backs in Danny Smith on the left and Chris Edwards on the other side of the pitch.

“Listen, I don’t think I’ve actually done anything today to be fair.  They stuck some decent balls in but again credit to the boys at the back, they’ve dealt with absolutely everything, said Walker.

“I haven’t had to do anything apart from scream and shout on my part and that was it and then second half we settled ourselves down and moved the ball around and started putting them under a bit of pressure and when we got the goal I think that was it.

“To win a league and do it was skipper and lift that trophy, it means so much more than that.

“For the gaffer, someone that I played with and he’s just a phenomenal manager, I’m pleased that we could do this for him and give him something back with the hard work and effort that he’s put in.”

So now on to Wembley and Walker will be feeling proud when he leads his team out before the game against Cherry Red Combined Counties League Premier Division champions Chertsey Town, whom are managed by former AFC Wimbledon and Harrow Borough boss Dave Anderson.

Walker follows in the footsteps of Jack Holland and Jason Bourne, who both led Bromley and Tunbridge Wells out in recent Wembley Finals.

“Win it or lose it, ultimately it will be a day out and on the 20th, the day after, you have had a day out at Wembley, nice memories, nice memorabilia or whatever, that’s it, it’s gone.

“With this, we’ve got promoted, next year, listen we’ll challenge ourselves again to go up against better teams, which is the real longevity that this club is set up for and everything involved.

“I’m expecting a very good side, a quality side and I think they will be a massive test but I’ll put myself against anyone.

“We’re one of the best sides at this level, I honestly believe that and we’ve showed that with some of the teams that we’ve played, teams that have been beaten once all season and we’ve gone and turned them over.