We don’t want The FA Vase Quarter-Finals to be the last stage we get to as a club, says Canterbury City striker Dean Grant 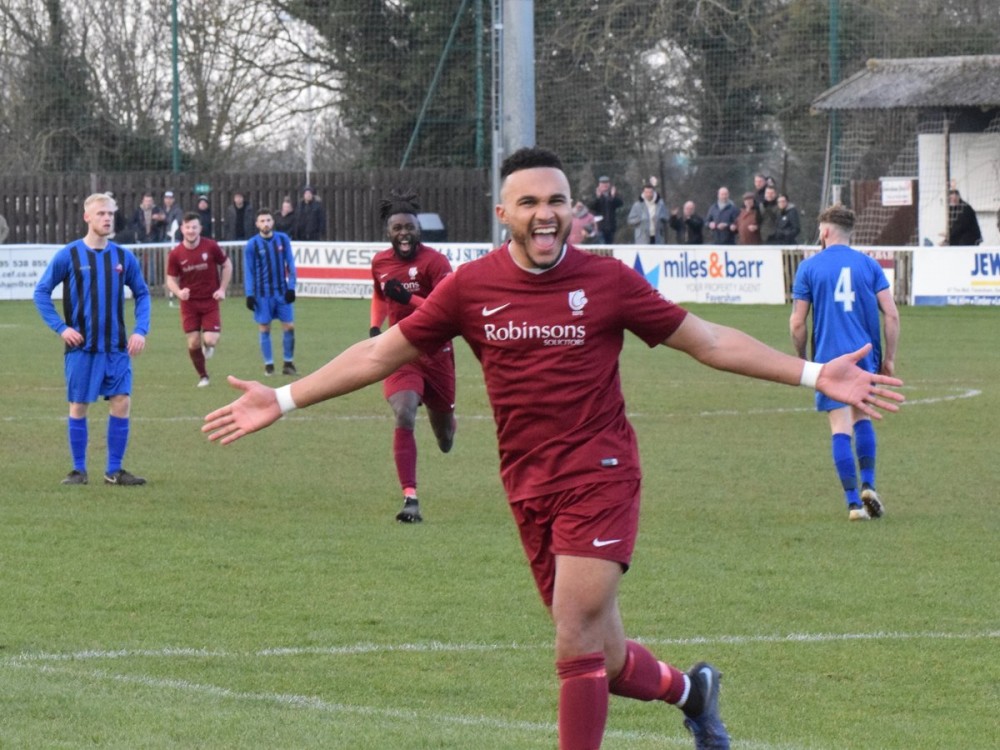 Chris Saunders opened the scoring inside the opening eight minutes before Grant slotted in a second underneath the goalkeeper in the 35th minute to put the Kent side in the driving seat.

Their United Counties League opponents pulled a goal back in the 59th minute through substitute midfielder Adam Swain and failed to create again after Saunders was controversially sent-off nine minutes from time.

Saunders, who was playing his second game for the club following his move from Bostik South East Division side Faversham Town, was booked in the sixteenth minute for a foul on Ryan Calver and was shown a second yellow card for diving inside the box following a challenge from centre-half Mahmoud Juma, who signed for Southern Counties East Football League First Division side Lewisham Borough today.

“First half, I think we mirrored that and we came in with a 2-0 win so you can’t really complain.

“Second half, maybe we started a little bit slowly. We didn’t get them turned enough, which led to us being on the defensive side of things a little bit more, which led to their goal and then very unfortunate with the two yellow cards,  I don’t know what the ref’s seen there to be honest.

“But we rallied around together, that’s enough to capitulate a team but we all got together, dug out a result and we’re in the next round.”

Grant revealed he received words of comfort from his girlfriend and parents ahead of Canterbury City’s biggest game in their history.

“It was a big game for everyone that’s in this dressing room,” said the 28-year-old.

“Personally, I approached it as any other game. It’s quite important to make it like any other game because everyone’s going to get nervous about it and have a little bit anxiety. Was I nervous?  To be fair I was but I spoke to my girlfriend and parents and they just reassured me and then I was ready and excited for the game.”

Grant missed a couple of chances before scoring, but he showed great character to score Canterbury’s second goal, just 37 seconds after putting a one-on-one past the far post.

“It couldn’t have been a better start to be fair. We all said that we needed to get at them and win our first balls. An early goal in a game sets you on the right road so I’m buzzing to get that,” said Grant.

“My left-footed shot (that I put wide), I’m annoyed with that in those areas, that’s my bread and butter.

“Before the games I’ll practice that but in those areas, left and right hand side that’s my bread and butter there and I’ve got to hit the target. I was annoyed with myself at the time.

“It was a bit wide but the way I approach a game if I’m in a position I have to hit the target.  Every time I get the ball in a shooting position, my standards are I have to hit this ball on target, otherwise it’s a wasted opportunity.”

Grant was delighted with his winning goal, latching onto Mobalaji Dawodu’s pass to slot underneath the advancing keeper to find the bottom near corner from the right-hand side of the box.

“I’ve got that into my game. I didn’t necessarily have it at the start.  I wiped it out of my mind and went for the next one so I was annoyed with the first couple of chances but my mentality was give your all again, it’s an area and I’m hitting it.

“In my mind it’s one for the road to getting the game done.  There was a chance for us to go 3-0 up when Chris Saunders got a volley. If he hits the target it’s a goal there but it was unfortunate, it went over the bar but through my mind at 2-0 I think ok we’re comfortable.”

Grant revealed the high intensity of Smith’s half-time team-talk, which spurred them on to go on and win the game.

He said:  “I think the gaffer done well just putting our feet on the ground if I’m honest.  It was quite easy for a few of us to come back in on a high and we’re going out after this as well.

“But the gaffer came in, he didn’t give us a hairdryer but he said ‘there’s more, we need more from you.’  It’s quite easy to think at 2-0 we’re comfortable, he’ll come in and just re-assure us but he wanted it! We all wanted it together today, but he wanted it more than anyone else. He wanted it to the maximum.  He came in and he just rallied us around to get going again and make sure we get through the second 45.”

Canterbury City are joined by Kevin Watson’s Cray Valley in the Quarter-Finals of The FA Vase, which is drawn tomorrow.

“It’s different for me having not played at this level before.  The FA Vase is the crème de le crème of this level, a realistic chance to get to Wembley, so it’s doable.

“It’s amazing.  We look around our changing room and we know what we’ve got here. The league standards for Canterbury City don’t represent that so if people want to take that on face value then do so and we’ll see what happens.”

This is the stage when players and supporters should start to believe that they will be playing at Wembley Stadium on Sunday 19 May 2019.

Grant said: “Yes, it’s normal to think like that. We’re in the Quarter-Finals now. We’ve got that game and the Semi-Finals are two legs, so three games away from Wembley.

“We’ve got to go and do what we can.  The club’s done so well to get here. I’ve come in late, I know some of the results we’ve had earlier on.  They want to be in there as well as anyone else.

“Quarter-Finals, I’m absolutely buzzing but we don’t want the Quarter-Finals to be the last stage we get to as a club. We’ve already exceeded where we’ve been in the past, we’ve got to keep going and use that as a stepping stone.”

Canterbury City attracted a crowd of 334 against Leicester Nirvana, who brought around 50 fans with them to Faversham yesterday, which shows the potential that the club can have if they are given the green light by the council on Tuesday night to build a new stadium.

“If they get it, massive. The City does need a football club and if they do get the go-ahead it’s looking likely to be one of the biggest clubs in the area,” said Grant,  competing with the likes of Whitstable, Faversham and Herne Bay in the Bostik League.