I’m sure I’m not the only one that feels it’s a bit ridiculous starting the season with the FA Cup game, says Canterbury City boss Ben Smith

CANTERBURY CITY boss Ben Smith has thrown his hat in the ring to say his side could be a dark horse this season.

Canterbury City finished in ninth-place in the Southern Counties East Football League Premier Division and have moved in to Deal Town’s Charles Sports Ground after leaving Homelands Stadium in Ashford. 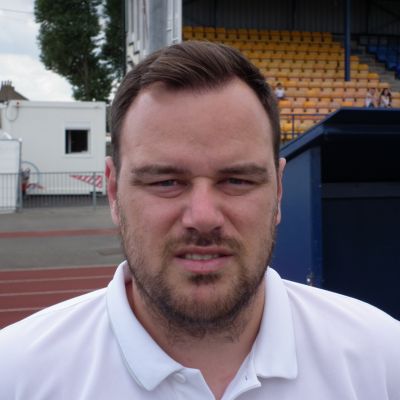 Ben Smith takes his side to Surrey to play Sutton Common Rovers in both The Emirates FA Cup and The Buildbase FA Vase this season.
Photo: Canterbury City FC

The club open their campaign with a trip to Sutton Common Rovers in The FA Cup Extra Preliminary Round on Saturday.

The hosts groundshare Sutton United’s Gander Green Lane ground on the artificial pitch there, but the match was first scheduled to kick-off at 4:30pm on the same day after the landlords televised Vanarama National League opener against relegated side Leyton Orient.

However, Canterbury City will now play Sutton Common Rovers at 3 o’clock on Saturday afternoon, with the game being switched to Merland Rise, the home of Banstead Athletic in Tadworth.

Smith is another manager of a ninth-tier of English football club to criticise The Football Association for starting their campaign with a FA Cup tie, which has £1,500 up for grabs for each winner of this weekend’s ties.

“I’m sure I’m not the only one that feels it’s a bit ridiculous starting the season with the FA Cup game but it was the same last season so we just have to get on with it,” said Smith.

“It’s also a weird one that we’ve drawn the same side in both FA competitions!

“It’s a tough draw to be honest and a real test early on to see how well we’ve managed to gel the squad together in a short space of time.

“The fact we’re not reliant on the prize money takes a lot of pressure off and in reality it serves as an ideal build-up to the league campaign.”

Smith believes his side will perform much better in the League this season and become dark horses this season.

“We believe that we’ve been successful in our recruitment during the off-season and added a lot more steel to the squad, which is something we identified during the back end of last season, especially when we played sides in the top six where we lacked physically.

“I wouldn’t say we’re necessarily one of the favourites this year to be honest.  You’ve got the likes of Cray Valley, Whitstable, Sevenoaks and Sheppey that have upped the anti again and look very strong.

“What I can say is that we are in a much better position to compete this year and we are excited to see how that far takes us.”