I need to make sure we give Crystal Palace at least a competitive game, says Bromley boss Mark Goldberg

BROMLEY manager Mark Goldberg says he wants his side to make it a competitive game for Crystal Palace tonight.

Alan Pardew has promised to send his first team squad for this prestigious pre-season friendly and as a result an ALL-TICKET SOLD-OUT crowd of around 4,000 is expected to watch Premier League players grace the Hayes Lane pitch. 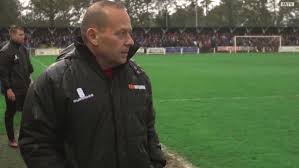 But speaking at 11:20 this morning, Goldberg revealed that he needs to bring in an emergency goalkeeper as Alan Julian, 32, is not available due to illness.

“Well, at the moment I’m a little bit concerned because I have a goalkeeper problem,” revealed Goldberg.

“Our goalkeeper’s not well so I have to find a new goalkeeper within the next few hours!

“But other than that we’re looking forward to the game.

“We are hopeful that we can at least give some amount of competition to our Premier League guests.

“It’s important to us that we come away from the game knowing that not only have we provided some amount of competition, but at the same time we can take something into our season from the game.

“What we don’t want to do is make it just a non-event and too many goals conceded, with the gap where we are in the pyramid to where they are and it ends up affecting our confidence going into the season.

“It’s quite an important game for us tonight. It will be a measure to a certain extent but everybody’s up for it and the club as a whole is very excited about hosting a Crystal Palace first team.”

Former Crystal Palace defender Jack Holland and Rob Swaine – if they are to be Goldberg’s two central defenders tonight (Holland played at right-back in their 3-0 win at Southern Counties East Football League neighbours Beckenham Town on Monday night) will be given their toughest test of the season tonight.

Pardew revealed in a statement on the Crystal Palace website earlier in the week that strikers Marouane Chamakh and Wilfried Zaha, whose previous clubs were Arsenal and Manchester United respectively, are expected to feature at Hayes Lane tonight.

“I saw a quote somewhere that Alan said that both Zaha and Chamakh are needing games and that’s one of the reasons they’ve arranged the game,” said the Bromley boss.

“I think there will be some big names playing.  Everyone wants to be tested against the best – but at the same time it needs to be of benefit to both teams.”

Bromley are welcoming a lucrative pay-day tonight ahead of making their Vanarama National League debut, when Wrexham visit Hayes Lane on Saturday, 8 August.

Goldberg, who guided Bromley to the Vanarama Conference South title in April, the club’s first title success since 1961, meanwhile, is more concerned about his club not being humiliated by his other club.

“Obviously commercially it’s good for the club but at the same time it’s got to work for both manager’s – that’s why Alan has asked for the game to be a first team fixture because he wants certain players to have game time.

“I need to make sure we give them at least a competitive game.”

Goldberg - Crystal Palace’s chairman between 1997-2000 – takes his family to Selhurst Park whenever he can.

His son, Bradley, 21, plays up front for the Ravens, while his daughter Lauren-Rose, is a singer-song writer.

The manager said: “Whenever I get an opportunity and we haven’t got a game then Brad and myself will go over with my daughter to watch Palace so they are my team outside of Bromley, always have been.”

This game is ALL-TICKET. Bromley have confirmed that all tickets have now been SOLD.