BROMLEY manager Neil Smith has made his sixth summer signing.

Former Charlton Athletic striker Reeco Hackett-Fairchild, 21, has returned to Hayes Lane, following his loan spell with the Vanarama National League club at the back end of last season. 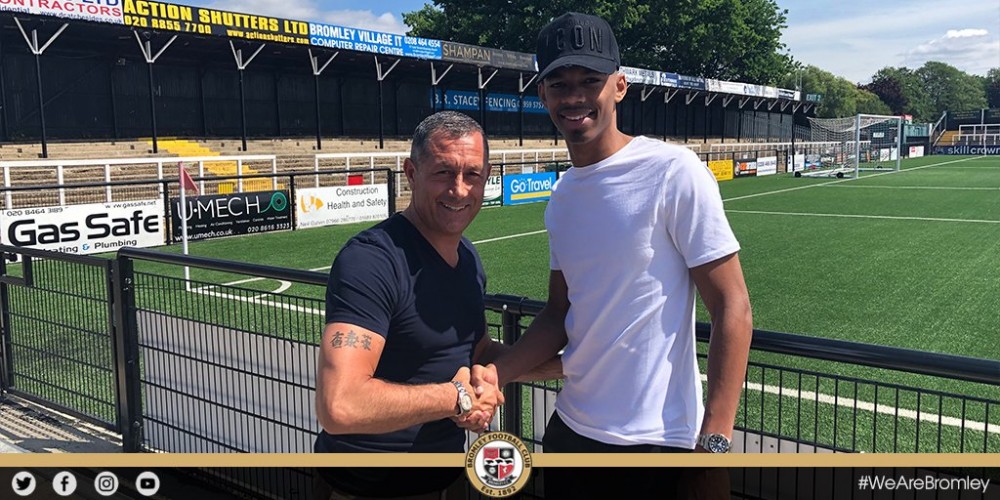 Hackett-Fairchild began his career in the youth ranks of Fulham and Brighton & Hove Albion, before signing his first professional contract at his local side Dagenham & Redbridge.

From there, after a short loan spell at Dulwich Hamlet, Hackett-Fairchild was spotted by Charlton Athletic.

He went on to make 24 first team appearances for the Addicks in all competitions, scoring twice.

He enjoyed National League spells at Boreham Wood and Bromley last season. He made five appearances for the Ravens, scoring a headed winner in the 2-1 home win over Leyton Orient on 2 April 2019.

“I’m delighted to get the deal over the line,” the striker told www.bromleyfc.tv.

“The way we finished last season and the time I spent on loan here previously made it a no brainer to make the move permanent.  I can’t wait to get started again now.”

Smith added: “We’re really pleased to sign Recco.  At the end of last season he was in fantastic form before he got injured.

“He’s a young man who wants to get out there and prove to everyone what he can do.

“He can play in different positions, meaning he gives us options in what will be an attacking squad next year.  Hopefully he can fulfil his potential here.”