Bromley re-sign Marc-Anthony Okoye: Being around the club for quite a part of my life it’s been amazing to see the transformation of the club coming back now

The 6ft 5” central defender helped Braintree win promotion through to the Vanarama National League by winning the play-offs. 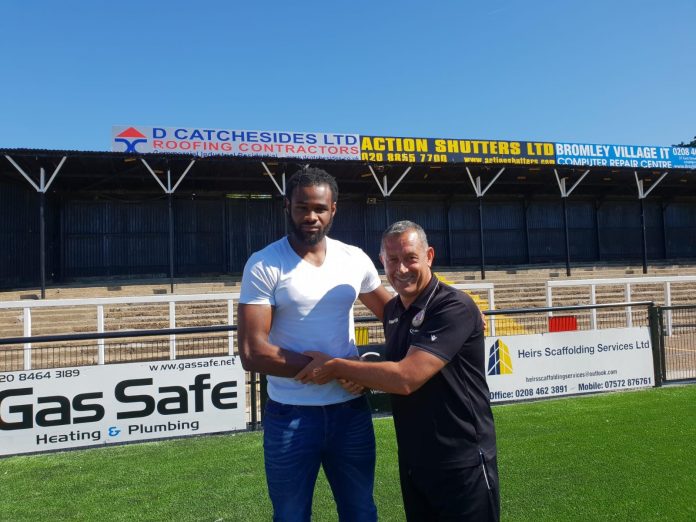 Okoye announced his departure from the Iron on Sunday and Smith has signed a player with leadership qualities to bolster his defence.

Okoye is no stranger to Hayes Lane, having progressed through the Bromley youth section from Under 9’s through to the academy. Prior to his solitary season at Braintree Town, Okoye had lined up for the likes of Erith & Belvedere, Dulwich Hamlet and Merstham.

“He’s a Bromley boy having come through the youth section with Bradley Goldberg and a couple others, as well as living locally, so I see it as us bringing someone back home,” Smith told www.bromleyfc.tv.

“He’s since been away from the club and has played for likes for Braintree where last season he enjoyed real success with them.

“Marc’s a mobile centre back and I wanted to make sure we were solid at the back after last season. I see him as a great acquisition and it’s another leader coming into this squad.”

Okoye added: “Being part of the youth sides here at the club and then moving into the academy set up I’ve known a few former players but we all went our separate ways after that.

“Being around the club for quite a part of my life it’s been amazing to see the transformation of the club coming back now. Everything has really developed and I think that’s a good sign of where this club is trying to head to.

“I can’t wait to begin pre-season, meet the boys and start full-time training.”

Okoye, who made 43 appearances for Braintree last season, added: "Delighted to be on board. Looking forward to getting started and playing my part in an already successful football club with contagious ambition."

“Marc-Anthony Okoye, Braintree’s centre half, led by example with a dominant aerial performance,” was a comment I wrote about his performance at Princes Park.

Left-back Tyrone Sterling, 30, who was released by Bromley at the end of last season, has signed for Vanarama National League South side Concord Rangers.