Bromley captain Jack Holland: I reckon if we had 11 men for the whole game we might have caused an upset

BROMLEY captain Jack Holland could not hide his bitter disappointment as his home-town club suffered another FA Cup First Round exit. 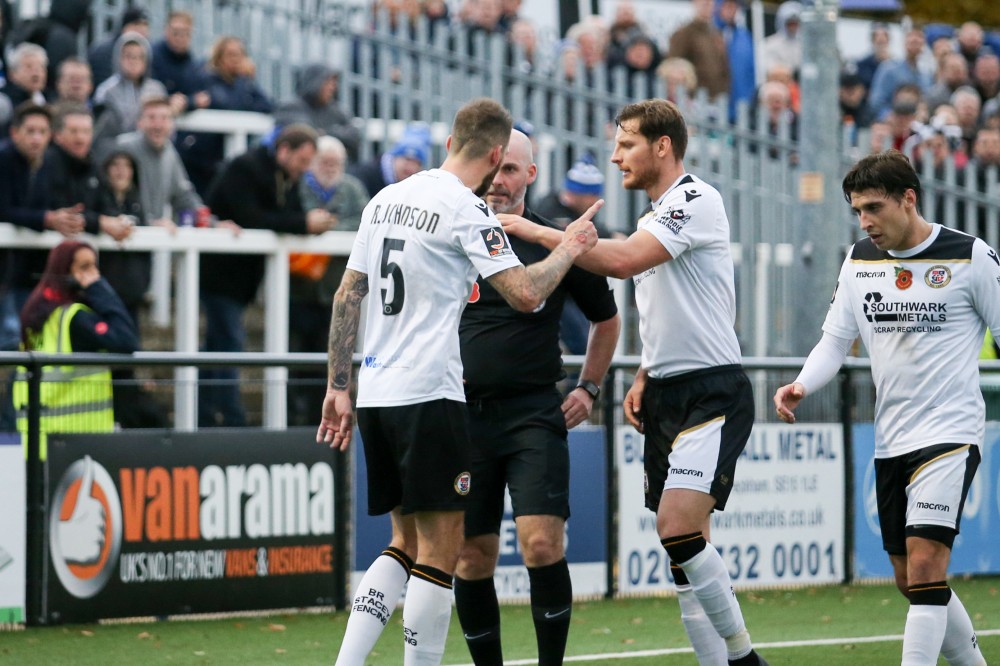 But referee Kevin Johnson pulled out a red-card and sent Raymond off on the stroke of half-time, after Raymond flicked George Cooper’s face with his right-arm as the two tussled down the right touch-line.

Cooper, who displayed the dark-arts to get his opponent sent-off by falling down like he’s been shot, swung in the resulting free-kick, which was cleared by George Porter to Alex Woodyard and Matt Godden volleyed in the equaliser on the stroke of half-time.

Godden, the former Ebbsfleet United striker, notched his 13th goal of the season in the 57th minute, before Joe Ward tucked home a third goal with six minutes left to send the brave ten-man Ravens crashing out.

“Everyone says about their league position and we shouldn’t be down on ourselves and stuff like that but we hold ourselves in such a high standard that any loss feels the same and I’m very disappointed,” said centre-half Holland, who heaped praise on his defensive partner Johnson for sending the Hayes Lane faithful into raptures with the opening goal.

Holland said: “What a man, what a goal that is.  Do you know what, I think everyone did enjoy it.

“The two midfielders, Frankie Raymond and Frankie Sutherland, I’ve got to say, in my opinion, are the best set-piece takers in this league.

“I think getting a goal is more than we deserved in that game I feel until the second half.

“Roger’s been waiting for his chance to get back in, it’s been a tight back-four but he’s relishing the opportunity and proved today why he should be there.

“We knew we had a game plan to frustrate them, keep it tight and not give them the space.  They want to go in behind, so that’s what we did.”

Bromley were in front against League One opposition for a total of 505 seconds but Raymond’s red-card cost his side the chance of producing a giant-killing act.

“The red card, I didn’t see it. I cannot commnet on it unfortunately,” said Holland.

“I know Frankie Ray and I’ll be surprised he did intentionally elbow someone, I can’t believe it myself.  I haven’t seen it so I won’t comment.

“With Matt Godden, he’s up there for a reason. He’s got 11 goals in the league so he’s a natural goalscorer.  His movement is good and he’s punished us – any time to concede is a bad time."

Manager Neil Smith had to rally his troops during the interval and play the entire second half with ten-men.

Godden stroked in his second goal in the 57th minute – which Holland blames himself for – although the Peterborough striker nipped in front of Richard Brindley.

Bromley were right in the game until the final six minutes when Steve Evans’ side killed them off.

“It’s hard, we were told to keep our heads up.  Their League One opposition, they’re up there,” added Holland.

“It’s hard though.  We’re a team of winners, that’s what we try to be. We hold ourselves at a high standard and any loss feels the same. It hurts just as much as any other loss. It’s hard but we’ll look at it in the next few days but it’s hard to take.”

Reflecting on Peterborough’s second goal, Holland said: “We’ll look at it. Am I in the wrong position? Maybe. I’ll take the blame for that. Having seen it, it was on my right. I’ll take it.

“That’s why Godden’s up there, that’s why he’s scored that many goals with his movement. A player like him, he does punish you.”

Holland summed up the mood around Hayes Lane post-match.

“I feel with 11 men we could’ve got something out of that game.  We always get a man sent-off for some reason.  I thought for the first 45 minutes we can hold our heads high.

“I reckon if we had 11 men for the whole game we might have caused an upset.”

Bromley have never beaten Football League opposition in The FA Cup and as the list below shows, Bromley’s last win in the First Round was back in 1945.

Previous managers, George Wakeling (against Enfield), Mark Goldberg (the next five) and Smith (Rochdale and Peterborough) haven’t been able to bring FA Cup glory to the Hayes Lane faithful.

“Do you know what, all this history and stuff you have one eye on it but at the end of the day you go out there and you try and beat the opposition on the day,” said Holland.

“You don’t think about things like that when you’re on the pitch but I think we’ve shown that we’ve proved that we’re there or there abouts with teams in league’s above us. It’s unlucky but we’ll try again and there’s always next year isn’t there, so we’ll just get around each other.”

A crowd of 3,107 (594 of them were away fans) packed Hayes Lane and Holland had this message for them.

“They were unbelievable! They’ve come out in their numbers again like they have all year and got behind the team 100% and as the captain, all the players, the staff and the club, we can’t thank you enough for coming out.

“We try our best every week for you and I know you give it all back for us, so we’ll take it into the league now. It’s our bread and butter and hopefully we can give you something to smile about.”

Next up is a trip to Brisbane Road to take on Leyton Orient in an all-ticket clash next Saturday in the Vanarama National League.

The Ravens are in fourteenth-place in the table with 23 points from 19 games, while the O’s are in second with 40 points, a point behind leaders Wrexham.

“It never gets easier does it but it will be another bumper game,” said Holland.

“I think we’ve selling out our tickets for that game so it will be another brilliant game, another tough game but we relish these tough games.  We’ll pick ourselves up, that’s the team that we are and we’ll go again.”

The Ravens are 10 points adrift of the play-offs and six points clear of the drop zone.

“Personally, we only look up, we won’t look behind us. We’ll have the respect for the teams behind us but we know where we want to be and where we feel we should be. We’ll put all our energy into the league now and hopefully start to climb it,” said Holland.