DOVER ATHLETIC striker Ricky Miller has been voted the Vanarama National League Player of the Year for the 2016-17 season.

Miller, 28, who arrived at Crabble from Luton Town, has scored 36 league goals this season, including four hat-tricks and he is currently five goals short of the all-time record for the top flight of non-league football.

Votes were cast in mid-April from each Vanarama National League club, with Miller coming out on top.

Chris Kinnear’s side go into tonight’s home clash against Macclesfield Town in sixth-place in the table with 75 points on the board with two games left to play.

The Whites are four points adrift of fifth-placed Aldershot Town, who complete their campaign on Saturday lunchtime at home looking to relegate Braintree Town.

Dover Athletic complete their campaign on Saturday at seventh-placed Barrow, who cannot grab a play-off spot.

Maidstone United, meanwhile, are can jump from thirteenth-place to tenth-place if they beat champions Lincoln City in an all-ticket affair at the Gallagher Stadium tonight.

Jay Saunders’ side have got 57 points and a win will see them climb above Bromley, who have collected 59 points and need a point at eighth-placed Gateshead on Saturday to match last season’s points total.

The club said that their 25-year-old captain won the award “with a large majority.”

West Wickham based Holland also scooped the Committee Player of the Season award, while midfielder Jordan Higgs scooped the players’ award as well as the Young player award. 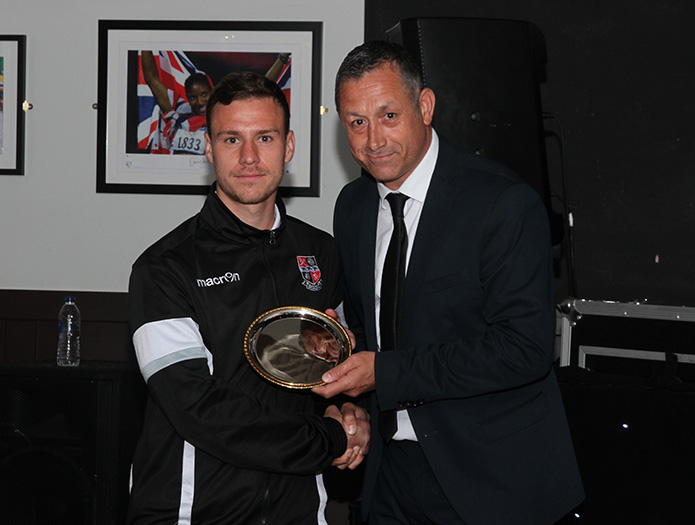 AWARD:  Bromley midfielder Jordan Higgs collects one of his player awards from his manager Neil Smith at the clubs presentation night
at Hayes Lane on Saturday following the Ravens' 1-1 draw with Guiseley.
Photo: Bromley FC

Higgs Tweeted: “Buzzing to have won young player and players player of the year awards.  Thanks to everyone that’s helped me this season.”