The Bromley Boys: It’s a funny film, it’s set in 1969 and the music’s fantastic, the soundtrack is brilliant. It’s had rave reviews and it’s out on DVD now and you can download it as from today and it’s just a lovely film, says Martine McCutcheon

BROMLEY can look forward to a home FA Cup First Round tie against highflying Sky Bet League One club Peterborough United at Hayes Lane next month.

Neil Smith’s side came away from Vanarama National League South side Gloucester City with a 1-0 win at the weekend, courtesy of Frankie Raymond’s 35-yard free-kick to set up a date with The Posh over the weekend of 10 November. 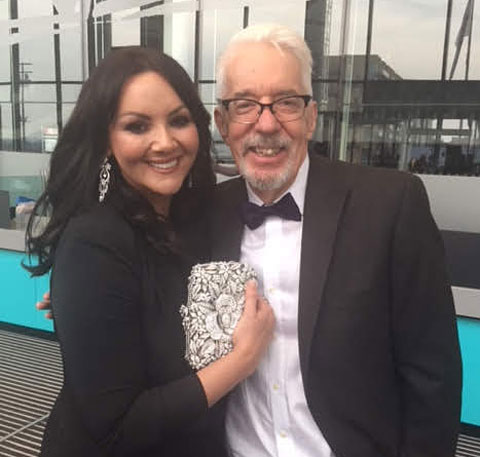 Martine McCutcheon alongside Dave Roberts, the author of The Bromley Boys.

Bromley extended their unbeaten run to five games following their win over Gloucester City – who groundshare at Evesham United’s ground in Worcestershire and can now look forward to their 16th appearance in The First Round of The FA Cup.

Bromley have not progressed through to the Second Round since 1945 and the club is now unrecognisable to the one that struggled both on and off the pitch in recent times, but the Hayes Lane outfit are becoming the talk of the whole of the country following their live appearance on BBC1 tonight.

Bromley finished bottom of the Isthmian League table at the end of the 1969-70 season, winning just three games and drawing four of their 38 league games, conceeding 111 goals, scoring 28 goals and collecting 10 points in the days of two points for a win.

The Bromley Boys is a funny yet touching coming of age football memoir played out to the sights and sounds of late 60’s Britain. Based on the hilarious novel by Dave Roberts, it recounts the author’s highs and the lows supporting the worst football team in the country at the time – Bromley FC.

Former EastEnders actress Martine McCutcheon plays Gertie Roberts in the film – the mother of son Donald Roberts, who is played by Alan Davies.

Donald follows the fortunes of Bromley.  The football scenes were held at Crockenhill’s Wested Meadow ground and not Bromley’s Hayes Lane stadium, that has staged Vanarama National League football for the past four seasons.

McCutcheon, 42, was on The One Show on BBC1 this evening to promote the film.

“Well, I mean for every part you go for you get one and you lose about 15 so our business is based on rejection and it’s kind of brushing yourself down and carrying on that makes you kind of survive in it really,” she said.

“When it came to the arts and the singing and acting and all that kind of stuff, I was fine.

“When it came to sports day and some of the academic stuff, not so good, so my mum put me in a race and I looked a lot taller than a lot of the other kids.  I came second but I was about eight and they were about five – and bless her she did it to make me feel better – that’s how desperate things got! How shocking! How desperate was that – and I still came second as well!”

Promoting the film, McCutcheon added: “It’s basically about a young boy who comes of age. He’s a bit strange, he’s a bit odd and he doesn’t know where he fits in in the world and his mum kind of realises that football, for various reasons, would really help him find himself and it’s the cutest coming of age story.

“He decides to root for Bromley FC – that’s who she decides to pick for him – it is the worst team.

“It’s a funny film, it’s set in 1969 and the music’s fantastic, the soundtrack is brilliant. It’s had rave reviews and it’s out on DVD now and you can download it as from today and it’s just a lovely film.”

McCutcheon grew up in Colchester, Essex, before her acting career took off, most notably appearing in EastEnders as Tiffany Mitchell between 1995-1998 and was keen to play a major role in the film after reading the script.

McCutcheon is no stranger to Bromley, she appeared at The Churchill Theatre in the Anthony Newly directed “Stop The World – I want to Get Off!” earlier in her career.

“I loved it and basically my husband’s from Bromley and his cousin Warren Dudley wrote the script and said ‘Martine will you just read it and see what you think?’

“The next thing I knew I just became her and you always know it’s a good sign don’t you and you read it and this part is mine!  She’s just a lovely salt of the earth mum and I can put my stamp on that. It’s about human stories and ultimately love.

“I am a football fan. I basically should have been an Arsenal fan but I moved to Chelsea and went in to this flat because they had good security there and I was on my own and I met (former Chelsea chairman) Ken Bates in a lift one day. It was basically right near the Chelsea grounds and he said have you ever watched a football game?”

“He said ‘you can come to a game and I’ll look after you and if you love it you can be a Chelsea fan.’

“All my family are Arsenal fans and my mum never took me and I always missed out.  I told my family and got completely disowned! How could you be a Chelsea fan?! That’s it, you’re no longer a McCutcheon – but I’m a Chelsea fan now!”

Bromley manager Smith was informed live on television that the Ravens had drawn Peterborough United in The FA Cup draw that was being screened live from The Top Field – the home of Hitchin Town – over on BBC2 at the same time.

Smith insisted times have changed at Hayes Lane nowadays and are looking forward to their FA Cup date as his side bid to knock Football League opposition out of the competition for the very first time.

Bromley resident Smith added: “We won on Saturday 1-0, so we’re in the First Round of The FA Cup.

“We went to Wembley last year, we got to The FA Trophy Final and took 20,000 supporters so times have moved a little bit further from 1969 onwards!”

Meanwhile, ticket details for the visit of Peterborough United will be released by the club in due course.