An IT Technician from Bexleyheath has World Football Cup glory in his sights during the next couple of weeks.

Midfielder Camen Bhandal, 24, has celebrated winning the Southern Counties East Football League First Division title with Gravesend based side Punjab United and will be competing in the CONIFA World Football Cup for his side Panjab FA. 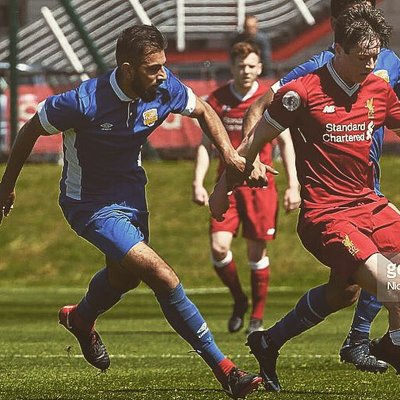 Camen Bhandal (left), who plays in Kent for Punjab United,
says he thrives off the pressure as his Panjab FA side
kick-off their CONIFA World Football Cup campaign in Slough
on Thursday.
Photo: Twitter/Getty Images

Panjab are one of 16 sides vying for World Football Cup glory and have been placed in Group D along with Kabylia, Western Armenia and United Koreans in Japan.

Panjab get their campaign underway on Thursday afternoon when they lock horns with Kabylia at Slough Town’s Arbour Park at 15:00, before they play Western Armenia on Saturday (17:00) before finishing off against United Koreans in Japan on Sunday 3 June (18:00).

“On a personal level our preparations have gone really well,” said Bhandal, who is also a part-time personal trainer.

“Having achieved promotion with Punjab United Gravesend, I’m going to the World Cup really confident and on a high.

“Panjab FA have had a few big friendlies recently, playing against the likes of Liverpool’s under 23s and we have given a really good account of ourselves.

“Having just beaten Dhaka Akadesh FC 7-0 last night in our final warm-up game before the tournament kicks off, we are looking forward to our first game on Thursday.”

He scored his only goal for the side against Liverpool last month, which is a good thing to put on your footballing CV.

Looking ahead to the big kick-off on Thursday, Panjab are rated very highly and Bhandal hopes his side get off to a winning start against Kabylia.

Kabylia is located in North Africa, between the Tell Atlas mountains and the Mediterranean Sea. It’s called the African Switzerland – and they are making their World Cup debut.

Panjab, meanwhile, is a geographical region comprising vast territories of northern India and eastern Pakistan  - and were runners-up in the last CONIFA World Football Cup in 2016.

“I don’t know too much about the opposition, however, I am expecting them to be really sharp and fit and technically sound,” said Bhandal.

“I think if we focus on playing our own game and work hard for each other we can get the job done.

“We are going in to the tournament ranked number one and as one of the favourites.

“I think we handle pressure very well and if we focus on playing to the best of our ability we will be difficult to beat.

“Personally, I thrive off pressure and feel that it helps to bring the best out of me.”

Nine of the 10 host clubs play on artificial pitches and Bhandal is relishing playing all three of their group games in Slough.

He explained: “Slough has a big Asian community and I think it is an ideal location for us to have our group games.  Hopefully we can get a good crowd to support us and push us through. It would be great to get people of all backgrounds to come and support the team. The pitch and stadium itself is fantastic and the staff are all really helpful.”

There’s a lot of players playing in the tournament with a non-league background in England and Bhandal sees this as a shop window for the competitors.

“Many of our team are playing at a semi-professional level and I believe a lot of our team can step up to play even higher, given the right opportunity,” he said.

“This is defiantly a great opportunity to display our talents and I hope some of us can get a chance to play higher.”

Domestically, Punjab United have secured back-to-back promotions and shall be playing in the ninth-tier of English football next season, the Southern Counties East Football League Premier Division.

Bhandal said: “The season we have just had was incredible, having come from playing Sunday League to now be playing Step Five football is a credit to everyone who is and has been involved in the club.