Farah’s London based side make their debut in the competition when they play Tamil Eelam on Thursday night (20:00), just an hour after the opening ceremony takes place at Hayes Lane. 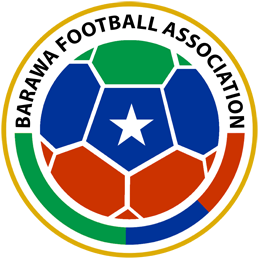 Tournament officials stated during tonight’s press conference held in Colindale that they have sold over 1,500 tickets online for the opening Group A clash, which is being staged at Vanarama National League outfit Bromley.

When asked about his side’s preparation, Farah said: “So far, so good! The fact that it’s Ramadan, it’s going to be a little bit challenging.  We’re going to be breaking our fast 10 minutes into the second half so there’s all of those challenges but I’m very happy with the squad.  We’ve selected our starting line-up and we want to get off to a good start.”

The two sides have met twice before, in the World Unity Cup at Sutton United’s Gander Green Lane.

Barara made their footballing debut by losing 5-0 on 25 August 2016, but bounced back to win 3-2 just three days later.

“We’ve played them twice. We know two of our opponents in our group very well, which turned out quite well.  We don’t know Cascadia at all but we know the Tamil’s very well.  We know their strengths, we know their weaknesses. They play really good football, so we’ve got a game on our hands.

“They beat us and we’ve beaten them so it’s even at the moment.  They beat us in our first ever game, that was a baptism of fire.  They were really high quality but then we’ve improved our recruitment.  We beat them second time round so we know their strengths and they’re an excellent footballing team. They keep the ball really, really well but we’re going to put out a team that’s going to nullify their strengths and hopefully capitalise on their weaknesses.”

All of these non-league clubs play on artificial pitches other than Enfield Town, who are the only host venue who play on a natural grass pitch.

However, it seems ironic that National League pair Bromley and Sutton United can stage this worldwide cup tournament but they aren’t allow to play each other in the English Football League Two on their current surfaces - if they were to get promoted at the end of next season!

Farah believes Bromley’s playing surface will suit his team down to a tee.

“The good thing is a lot of our preparation has been on 3G’s so we’re quite used to it, we actually prefer that. We’ve been playing a lot of our games in Haringey, which is where we’re going to be playing our third game against the Manx (Isle of Man, who are known in this competition as Ellan Vannin), so I think that suits our game.

“We like the ball on the ground so that artificial surface suits us. We’ve never been at Bromley so it’s going to be an honour. The majority of our players are based in north-west London, Brent, that sort of area but we’re looking forward to it.”

Many English based non-league footballers will be playing in this tournament so it will be a good shop-window for them to impress to secure moves higher up the food chain.

“A lot of our boys are young so it’s a really good opportunity,” said Farah.

There were at least 100 journalists at tonight’s pre-tournament press conference at a hotel close to Colindale underground station so host clubs must prepare for a tournament that has gripped the attention.

When asked about his side’s aspirations, Farah replied: “If they apply themselves well, in terms of experience we’re lacking, one or two players are really good and hopefully they’ll carry the team through, top two is our target in our group.  We really want to go for that. We want to win every game that we play in but we know it’s not going to be easy. Every team wants to win.”

There are 16 teams in the tournament and games come thick and fast ahead of the Grand Final at Enfield Town’s Queen Elizabeth II stadium in north London on Saturday 9 June (18:00).

“It’s going to be very challenging, honestly, but I think once we get the group games out of the way, we’ll see where we are and that’s when we’ll really revaluate our expectations but initially our ultimate target is to finish in the top two and if we do that we know the next group we’re facing is going to be very difficult,” said Farah.

Farah wants you to flock through the turnstiles at Hayes Lane on Thursday night, watch the colourful opening ceremony and watch African and Asian football on your doorstep.

“They should come and watch this tournament!  The good thing is there’s not much football on at the moment so it’s a great time to catch and to witness real gut spirited community-oriented grass roots.

“There’s so many different languages, so many diverse cultures. The warm-up alone is going to be colourful with a lot of the nations that are here.  Come to see an alternative form of football. It’s still football, a ball, 11 players and everything but it’s going to be played in a slightly different way.

Farah admitted his players will feel pressure with it being opening night and a Hayes Lane crowd that love watching carpet football.

“It all depends on the result.  If we get off to a good start then everyone will be buzzing but if not we’ll have to pick ourselves up and keep going.

“Lots of pressure being the hosts but I think the type of group and the type of players we have, that pressure will drive them.”

Admission prices on the night from the turnstiles: £12 (adults); £6 (youths).