It is with a heavy heart that I announce that I am leaving Fisher, says captain Robert Brown

The 27-year-old played a key part in Dean Harrison guiding the club to a club record third-place finish last season but with an Essex based manager in Allan Fenn at the helm and players from across the River Thames playing for the club, Brown has decided to leave the club and will now be playing his football in Thamesmead instead. 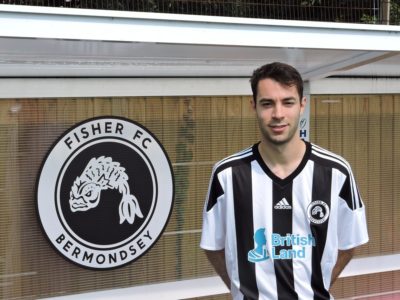 Fisher captain Robert Brown has left the club with a heavy heart and has signed for their league rivals Welling Town.
Photo: Fisher FC

“It is with a heavy heart that I announce that I am leaving Fisher,” Brown, who has scored 33 goals for the club since the start of the 2017-18 season, said in a statement that he posted on his Twitter account.

“Although we are accustomed to players at the non-league level leaving club’s consistently, I always saw myself as a Fisher player here in which I grew so attached to the club, actually, better said, the people at the club, the supporters, the fans that came to watch us play in the game we all loving playing in front of the Fish Pond at the mighty St Paul’s.

“I have thought about this decision thoroughly and it is for us to part ways.

“It was an honour leading the side out each week in front of you. I wish nothing but success as a club, nothing but celebrations and new formed bonds with new players that put the shirt on for you, who if lucky enough, may experience the same support and songs I was so graciously accustomed to from you.”

Captain Brown made over 80 appearances for Fisher, helping them to promotion from the First Division (finishing in the top three) and last season’s highest placed finish.

Welling Town are in eighth-place in the Premier Division table today, having banked 11 points from seven games, while Fisher have sunk into the bottom three with five points from their eight league outings.

Welling Town manager Danny Wakeling said: “He’s a player we identified earlier on in the season and we kept an eye on the situation at his club and he remained despite the big turn over after the previous manager left. We played a waiting game and I approached Fisher and got permission to speak to him.

“He’s had numerous approaches, some unofficially and a couple officially that I’m aware off and despite better offers, so to speak, we managed to get our man.

“He’s very aware of his responsibilities, he’s a throwback player and throwback person so I’m delighted to get him on board.  He adds to our goalscoring department.”

Welling Town chairman Kevin Oakes told www.wellingtown.co.uk:  “In our very short time of speaking with him, he has demonstrated the decent, respectable professional attributes so rare nowadays, not just in football but in life and meets our managements requirements in terms of both talent and attitude.

“It is no surprise he was a fan favourite at Fisher as a result – and their captain – and of course we are not surprised to expect Fisher and their fans to be disappointed to lose him.

“To his enormous credit, if he can have half the impact at our club as theirs, he’ll be a key man.

“We’re delighted to have him on board and look forward to a long and successful goalscoring era.”

Mark Goldberg’s side - currently fifteenth-place in the Vanarama National League South - thrashed Isthmian League South Central side Chipstead 7-0 in The FA Cup Second Qualifying Round yesterday, while the Boots were without a game.